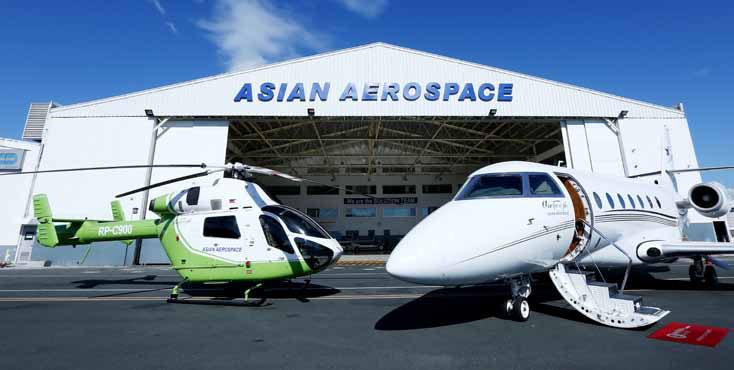 Unparalleled customer service is key to the success of Asian Aerospace, a pioneer in aircraft charters in the Philippines.

From its humble beginning as a one-helicopter operation, Asian Aerospace now dispatches a fleet of 16 jets and helicopters across the Philippines. A pioneer in aircraft charters in the country, the company is proud of its steady growth over a span of 20 years.

Asian Aerospace is the Philippine Distributor and Service Center of Major Aerospace brands such as Gulfstream Aerospace, Pilatus Aircraft, Viking Aircraft, and MD Helicopters. Its Service Centre is patronised by jets in Asia and the US for maintenance services. It is partnered with the leading International Business Jet Trip Handling Company in the World, Universal Weather and Aviation, and handles majority of the VIP flights flying in and out of the Philippines.

With 16 jets and helicopters, Asian Aerospace operates its own fleet of aircraft for lease, timeshare and charter serving wealthy individuals, international travelers, hotels and resorts, local and international companies, multilateral organizations, and the government. Prospective buyers can even take demo flights on its aircraft to help select the best one for them. As a more affordable option than buying your own aircraft, Asian Aerospace provides timeshare memberships for its entire fleet — this way, you get access to 16 different aircraft for a small fraction of the price of one aircraft, and with no additional charge when you fly.

“Since I started, I basically just worked with my dad. His experience and knowledge is far more than any master’s course could ever give. I believe that’s true for any family business. Most of the things I learned in business are from him,” shares Rodriguez who does a lot of operations work. He handles sales and marketing and basically makes sure that the company is functioning optimally. More often than not, he ends his day at midnight, even later at times. “The reason we work until late is because today’s work is today’s work, and tomorrow is another day. We set everything up the night before so everything is ready, turnkey or flick of a switch, all set.” He adds, “I oversee everything—making sure customers are happy, the employees do a good job, and everybody gets a win-win.” Rodriguez believes in the importance of customer service. His father mentored him in the ways of making sure that the customer is always satisfied and taken cared of.

A CNN reporter who flew with Asian Aerospace to his coverage area during one of the major typhoons in the Philippines was pleasantly surprised that a former presidential pilot was flying the plane. As Rodriguez emphasizes, making sure that the customers are in good hands is the company way of making them feel safe and valued. Asian Aerospace even has foreign pilots, a feature that lends an international feel to the flight. These aviators have thousands of hours of experience, and they have been all over the world. They know what to do wherever they are in any part of the world.

The company is in the process of expanding and adding more aircraft, apart from its plan to open new facilities in the provinces Iloilo and Cagayan de Oro. Currently, it has hangar facilities in Manila, Clark, Cebu, Davao, and Boracay. “Last year, we acquired five additional aircraft—three high-end twin-engine helicopters and two Gulfstream jets. These acquisitions are very suited for the current market. Now is the right time as people have become more understanding of the advantages of flying private,” says Rodriguez.

Asian Aerospace has different brands to market its services. One of its brands is AirTaxi.ph, which offers Timeshare
Membership Programs such as Emerald Class where clients can avail of priority aircraft service at discounted rates. Another brand is GreenHeli located at local tourist hotspots such as Boracay; it offers Helicopter Tours and Island Hopping Services. Another brand with a different kind of service is SecureAir that specialises in evacuations during medical emergencies or natural disasters. 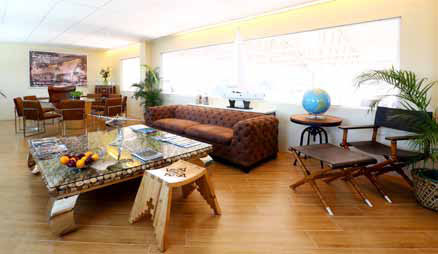 “What differentiates us is our organisation of two hundred eighty people all over the Philippines. We have a full organisation dedicated to making sure the aircraft is in tip-top condition and ready for flight,” relates Rodriguez. Together with his father and brothers, Piero Rodriguez and Pierce Rodriguez, this young executive is very hands-on with the business. “We invested a lot of our time and resources into the company, building it into the way it is.”

Despite having all the aviation resources at his fingertips, Paj Rodriguez admits that the thought of flying has crossed his mind, but he instead prefers to stay on the ground and make sure everything works well. He is pretty grounded, indeed, in more ways than one.

This article originally appeared on the September 2016 issue of The Philippine Tatler.

The National Aeronautics and Space Administration (NASA) science aircraft P-3B has started flying over Philippine skies to signal the start of the United States agency’s joint climate study with Filipino researchers led by the Manila Observatory (MO). NASA P-3B took off on August 25 from Clark, Pampanga as part of…

David Celdran shows us a day in the life of an AirTaxi Member by flying around Manila and Clark with AirTaxi’s MD Explorer Twin Engine Helicopter. Also, get introduced to the AirTaxi facilities and VIP lounges in both Manila and Clark Airports.

ANC’s Executive Class closes its Annual Christmas Wishlist for 2016 with the Pilatus PC-12NG: a favorite for both pilots and VIPs alike. It’s the best VIP aircraft suited for archipelagos like the Philippines.