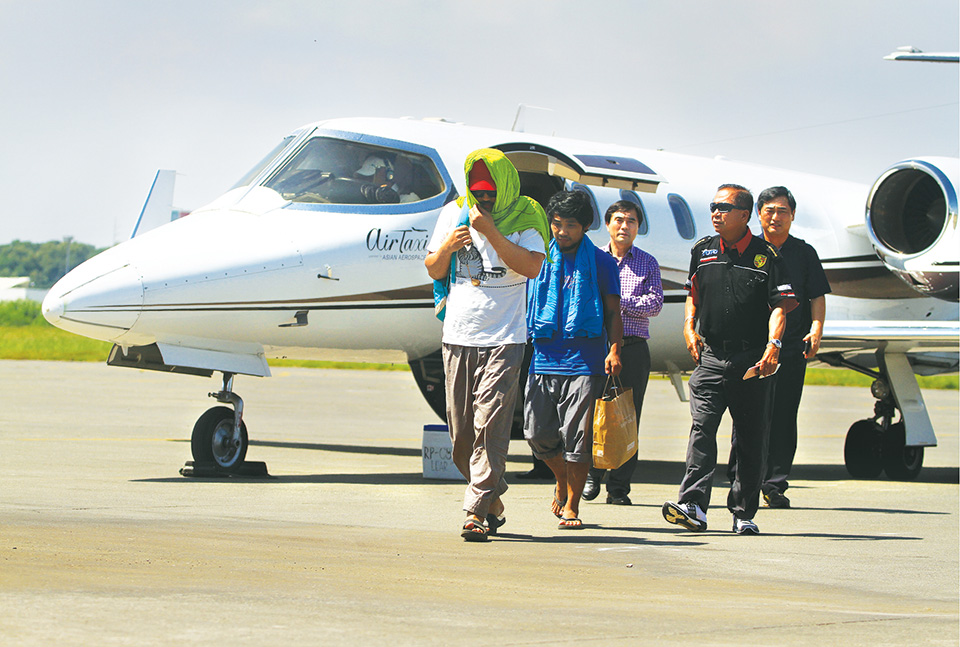 The Abu Sayyaf Group (ASG) has released a South Korean ship captain and his Filipino crewman held captive by the bandit group since October last year, officials and the military confirmed yesterday in Davao City.

“We were almost hopeless but I am thankful we were able to come home safely with the help of Sir Dureza and the president for assisting us,” Alindajao, 31, from Cebu, said in a news briefing.

FREE AT LAST – Presidential Adviser on the Peace Process Jesus Dureza (second from right) escorts released kidnap victims South Korean Park Chul Hong and Filipino Glenn Alindajao from Cebu upon their arrival in Davao City Saturday noon after they were released by their Abu Sayyaf captors. They were released after almost four months in captivity. (Keith Bacongco | Manila Bulletin)

South Korean captain Park Chung-Hung, 38, did not speak with reporters but like Alindajao, appeared to have grown a beard while in captivity.

It will be recalled that the two sailors were abducted by around 10 gunmen allegedly belonging to the Abu Sayyaf near the coast of Bongao, Tawi-Tawi.

The two were forcibly taken from heavy load carrier Dong Bang Giant 2 off the southern entry of Sibutu Passage, a 129-kilometer wide channel being used by shippers in transit between the Pacific Ocean and the West Philippine Sea.

“Reports say that the MNLF based in Kagay, Indanan, Sulu helped facilitate the release of the kidnap victims,” said Tan.

Dureza said that plans for the release of the two kidnap victims began as early as December.

Addressing a question from media, he said he had no personal knowledge if a ransom was paid for the release of the hostages.

However, intelligence reports revealed that P25 million was paid as ransom for the release Park and Alindajao.

After the ransom payoff, the two were reportedly released by ASG subleader Alden Bagade in Barangay Kagay at around 7 a.m. yesterday.

The two victims were then fetched by the MNLF and were turned over to the former Sulu governor.

Dureza reiterated the government’s no ransom policy, but the Abu Sayyaf does not normally free hostages unless a ransom is paid.

The Abu Sayyaf is a loose network of militants formed in the 1990s with seed money from Osama bin Laden’s Al-Qaeda network, and has earned millions of dollars from kidnappings-for-ransom. (With a report from AFP)

The carrier said in a statement on Wednesday the H130 helicopter will be used for transporting passengers and sightseeing services in the islands in the south of the country, which include Boracay, Cebu and Palawan. “We are excited to introduce the first H130 into our expanding fleet. Having experienced the…

GETTING AROUND IN STYLE. General manager Rene Egle of the Shangri-la Mactan Island Resort and Spa speaks at the launch of the resort’s new yacht, the Celandine, air taxi service and luxury sedan. The rise of a market that demands more “experiential travel” has led a five-star resort in Mactan…

By MONICA ARANETA TIOSEJOImages by NOEL PABALATEVideo by ROCHWALD FIGUEROA Most airlines will tell you where to travel. They’ll use photographs and videos of tropical idylls, falling leaves, and winter wonderlands to provoke the market’s longing for escape or adventure. A journey could be set into motion by nothing more than one happy visual. For business…